A line in the latest single from Becca, ‘No One’ has caused conversations to start again about what really is the true complexion of the musician.

The song which features South Africa’s Busiwa, and DanceGodLloyd’s DWP Academy has a line “I’m a woman and I’m black and I’m proud and I’m strong”.

The above statement has sparked conversations on Ghana’s social media trends.

Akua Blakofe, now known on social media as Sanaaheneba Akua, has given hints on why Becca may have ‘bleached’.

In a comment she made under a post on Facebook, the former Deputy Chief Executive Officer of the Ghana Tourism Development Company (GTDC) suggested that Becca may have bleached because of her husband.

Sanaaheneba Akua who said she was no longer a fan of Becca, who was formerly black as herself (Blakofe) said, “I’m no longer a fan. She looks disgusting. Because Nigerian women are “fair” she wanted to look that way for her hubby? And sorry to say, but men who go down on women who bleach, doesn’t it affect their brains? Sucking those chemicals? How do they deal with smelly skin, especially down there???? Because I know bleached skin smells, so down there dierrrrr… Yuck yuck yuck.”

She further questioned what it meant for Becca to say she was black and proud.

“Becca says she’s black and proud. Discussion today, what does it mean to be Black & Proud. Lezgo.”

The award winning musician became a topic of discussion a few years ago when her fans and some Ghanaians noticed a change in her skin tone from black to fair. 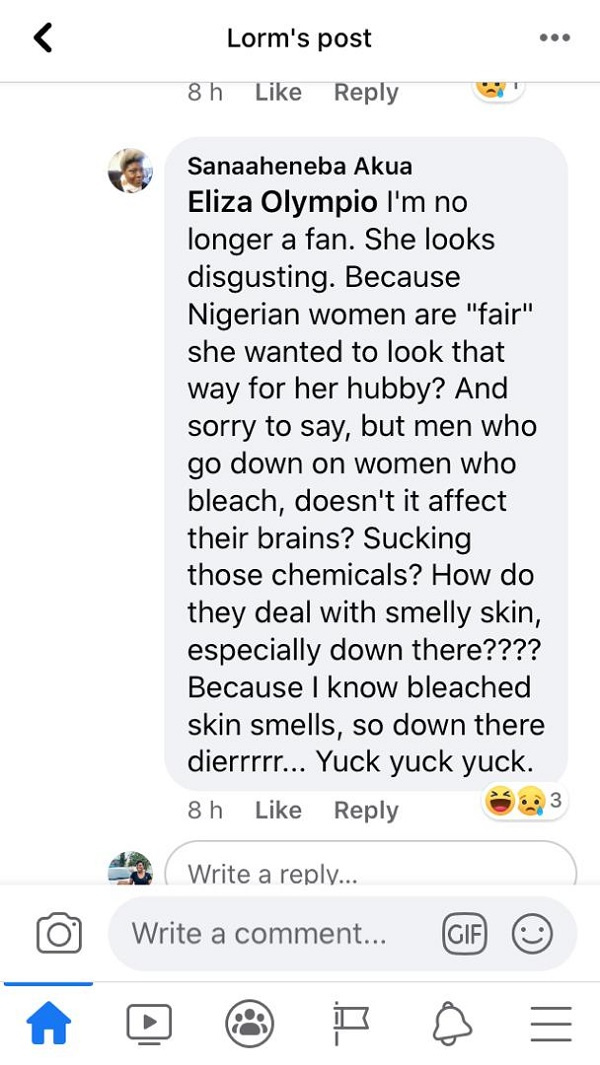