Some lifestyle can let you think different Efia Odo want to dodge or skip heaven and hell and create her own place she will go when she die. Miss Efia had joined the 69% of peoples who don’t believe in Jesus or disagree with him but before efia would be who she is now, she then agreed with Jesus but now, she don’t want to even hear Jesus name at all.

I do not know if she was deceiving Jesus christ to become famous and now she has got the fame so she do not want or care who Jesus is again?

Or maybe she want to say there no Jesus Christ so that she would got vim to do her slaying and other things she thinks it might be a sin and would take her to hell or I guess maybe she don’t want to do her model, fashion, and media presentation with fears so she is firstly clearing Jesus from the air and do her job, because the way this woman had been against Jesus, even if you don’t like someone they don’t treat or criticize the person like Efia Odo is doing to Christian Jesus.

Although not any body will have faith in Jesus because we are all having different faiths altogether, but Efia odo had keeps on saying there is no Jesus, there is no Jesus, on her recent Facebook status updates Efia Odo had revealed or published that Jesus Christ which Christians worship him as God do not deserve that name or that position to be worshipping.

This woman clearly stated in her Facebook post that she believes in only one God and that God is never Jesus and she will never call her God Jesus because Jesus was just a mere person like her and she can never worship her likeness or someone who is human being just like her.

She wrote God is love and positive force.
The creator is too high above my being understanding to even call him a name like Jesus or any other man given name.

She proceeded  saying who am I to even give my creator a name I can never do that because I can never give a name to someone who  created me.

So when inghana.today went to the market to get some news for their followers or readers this what Efia Odo told them to tell the world that there is no Jesus and all the things Christians pastors and prophets are doing are all lies an fake we shouldn’t believe them, because their father himself the Christians leader “Christ” which the Christian named  their religion after him is fake so how much more it’s followers or the pastors. But she believes that there is a certain God but Jesus is just a cover but nothing else.

Watch the screenshot below 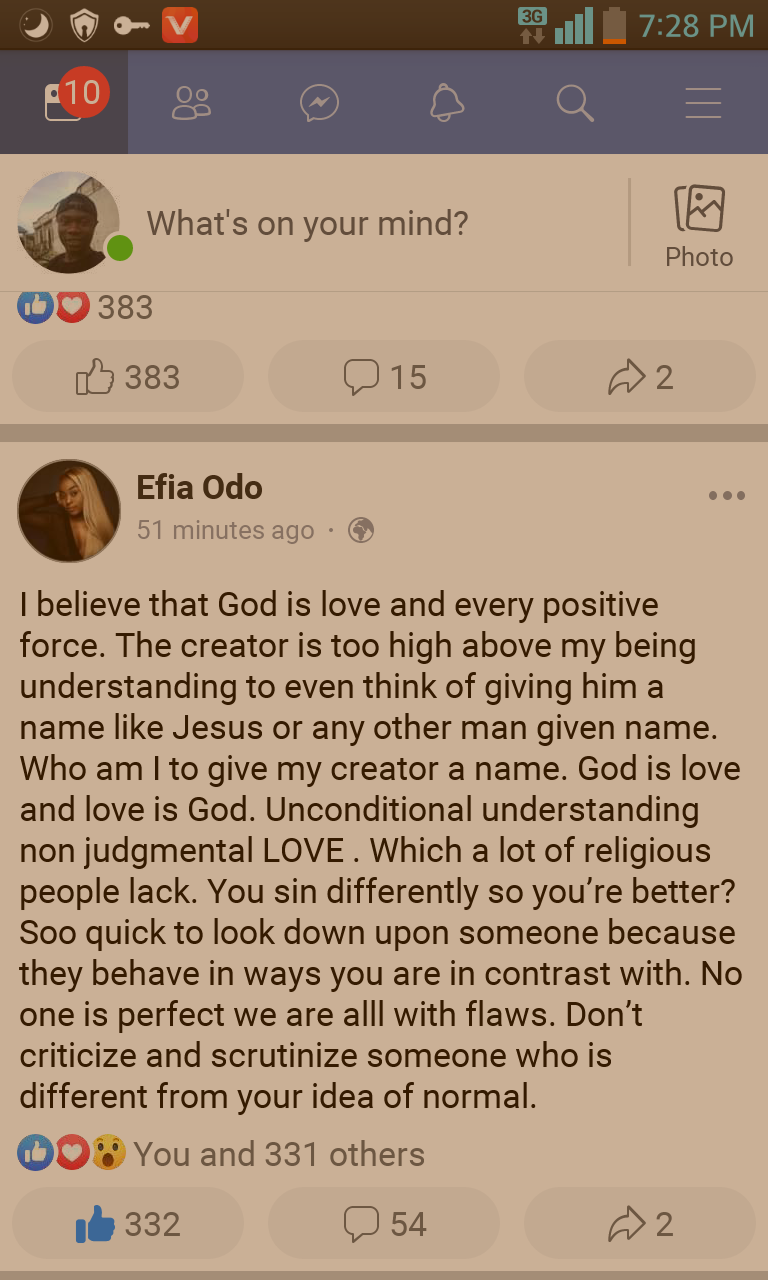