Musician and political activist, Kwame Asare Obeng, popularly known as A-Plus has taken to Facebook to vent his disappointment at President Akuffo Addo, describing him as ordinary.

A Plus who sometime in the run-up to the last general election in 2016, had described Akufo Addo as “not an ordinary politician” has taken back his words after expressing his disappointment at the president’s leadership.

A-Plus was one of the fiercest critics of the erstwhile Mahama administration and a staunch supporter of then-candidate Akufo Addo. However, the ‘marriage between the two appears to have ended in divorce’ as the musician has on several occasions expressed disappointed at the government’s management of affairs.

Commenting on a video which appears to depict measures put in place by the Abu-Dhabi government in order to ensure the safe re-opening of the Kingdom’s airports after it was shut down in the wake of the coronavirus pandemic, A-Plus chastized the Akuffo Addo government for choosing to rather spend on a new voter’s register.

In a Facebook post, he wrote, “Ghana won’t rush to spend 200 million on something like this and immediately open the airport so that the world will transit through here to boost our economy. They will rather spend it on a voter’s register so that Nana Akufo Addo will win another election.

“Every Rape Victim Enjoy The Act At A Point”- Counselor Lutterodt

That’s is all they care about” “In 2016 I made this statement, “Akufo Addo is not an ordinary politician and therefore is not for ordinary people.” I’m sorry, Nana Addo is just like any ordinary Ghanaian politician. Very ordinary. Nothing special. So how do you feel when all of you African leaders travel across the globe and see people using their brains like this? Isn’t it the same brain God gave to everybody? 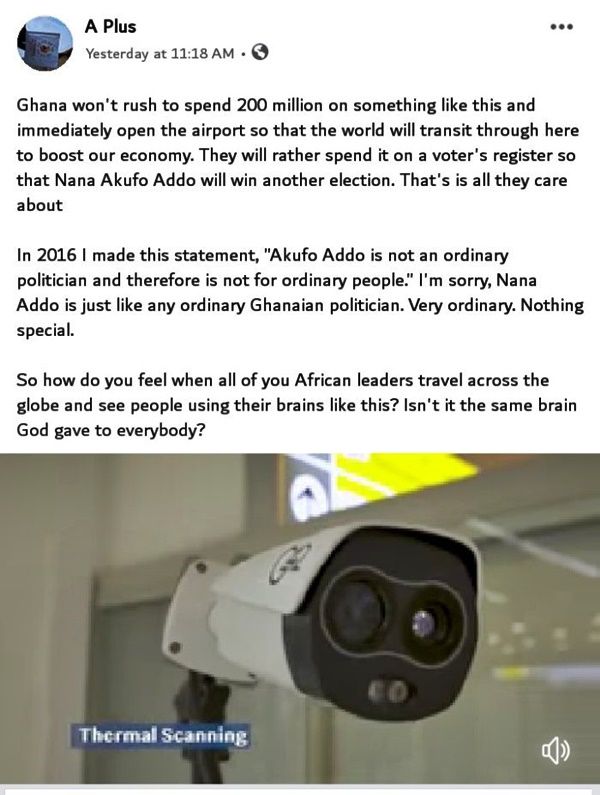 Adebayor Unfollows Funny Face On Instagram After He Disrespected Him