Salma Mumin in the early hours of Wednesday has rained curses on her colleague celebrities.

According to the Ghanaian actress and entrepreneur, she is praying to God to never forgive her colleagues in the showbiz industry who have ever said anything negative about her, without having the right knowledge on who she actually she is.

“May God never forgive you for opening your mouth to say anything negative about me that you don’t know,” the “Hashtag” actress wrote in an Instagram post and also emphasized that the curse is not only targeted to her colleagues but fans as well.

Adding to her post, Salma also stated that unlike the others, she is a very hardworking person who invests her money.

It’s unclear what triggered these comments from the actress but a few minutes after sharing the post, she deleted it.

However, that wasn’t before pulse.com.gh screen-grabbed her post. See the screenshot below: 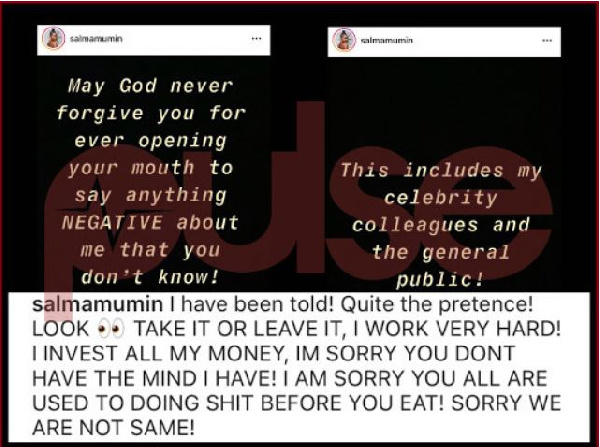 The last time Salma Mumin was in the news, it was about the back and forth she had with Moesha Boduong, as they publicly shaded each over their “fake bums” after reports alleged that she (Salma) has gone for surgery abroad to enhance her figure.

Sarkodie, Shatta Wale, Becca and others set to perform alongside Cardi B this December

I Didn’t Steal Anyone’s Man, I Prayed And Waited For My Turn – Mercy Aseidu Clarifies(+Video)